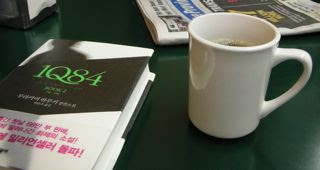 Just finished Haruki's new novel "1Q84" (in Korean). It is about a woman and a man who slipped into the year of 1Q84 from the year of 1984. Lots of metaphors and imagination. There is a rumour about the sequel. I would love to read it.

As always, Haruki included lots of songs in his work. This is one of the songs.

If you are reading this book (once it has translated into English), I suggest you to go to this site and enjoy the music while reading.
Posted by ana at 2:36 PM

1Q84 is now on my list of books-to-read. I'll have to wait a while for the translation, though. Good thing I've already got a huge stack of books that I want to read.

the enthusiasts: I think you will like it. Thanks you recommending Coraline. I did enjoy it.